econlife - Who Will Sacrifice Civil Liberties During a Pandemic? by Elaine Schwartz 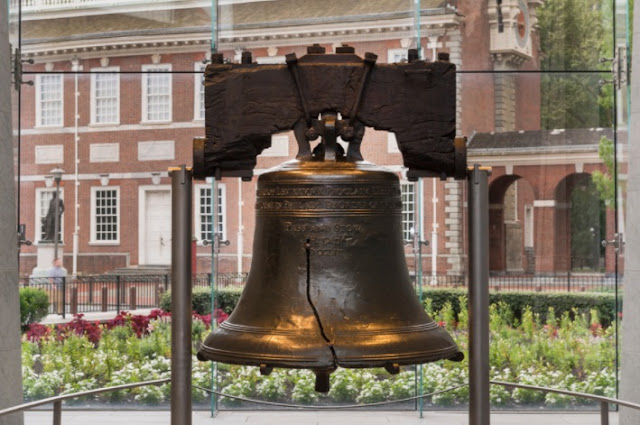 In a new NBER paper, a group of Harvard and Stanford scholars investigated how much of our civil liberties we would trade for better health conditions. Their data came from 370,000 individuals in 15 countries. Given to participants between March and October 2020, the surveys were ongoing.

As a teacher, I could not resist beginning with a quiz. Before seeing the results of the survey, do give it a guess. Starting with the country least willing to sacrifice civil liberties for better health conditions (#1) and ending with the place most willing (#14), please create a 1-14 ranking. (In this part of the survey, one of the 15 countries, Sweden, was excluded because of different data.)
The countries:
Australia, Canada, China, France, Germany, India, Italy, Japan, the Netherlands, Singapore, Spain, South Korea, The United Kingdom, the United States
The answers are in the five graphics that precede “Our Bottom Line.”
Civil Liberties Tradeoffs
Asked about the tradeoff through survey questions, 80 percent of the participants were willing to trade off some civil liberties for better health conditions. However, as you might expect there was a big difference between the United States and China. During a major crisis, four times as many U.S. respondents as those from China were unwilling to give up civil liberties. Among the Chinese participants, only five percent were unwilling to sacrifice rights.
The researchers, though, cited individual differences.  For certain people, as worry about the health risk went up–especially those most susceptible to COVID-19–so too did their willingness to give up liberties. Others valued civil liberties above all, They also found that individuals with less education, less attachment to the labor force, and (in the U.S.) racial and ethnic minorities were less willing to trade liberties. As for the time factor, initially, there was less willingness to give up liberties. Then, after June, attitudes plateaued.
Quiz Results
For the quiz results, it all depends on which civil liberty you select. The length of the bars reflects individuals’ unwillingness to give up that civil liberty. You can see that China is definitely last and respondents from Singapore (SGP) and India wound up with shorter bars. I found it interesting that “Endure Economic Losses” had the least resistance.
Sacrifice Own Rights and Relax Privacy Protections: 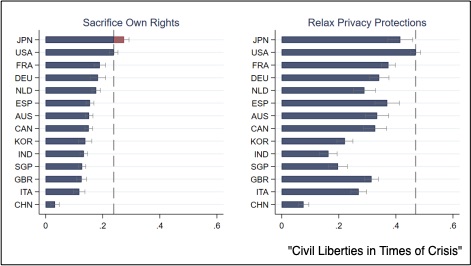 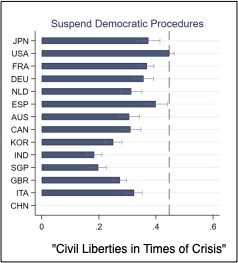 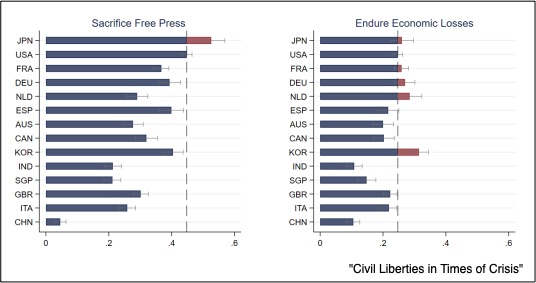 As always, looking at trade-offs through an economic lens, we can say that, “Choosing is refusing.” Furthermore, we should always keep in mind that every decision has a cost. Defined economically, cost is a sacrificed alternative that need not be money.

My sources and more: Today’s post was based on this new NBER paper. Ninety pages long, it has much more than I presented. I suggest taking a look. It is un-gated.

Our featured image is a National Park Service photograph of the Liberty Bell that is located in Independence National Historical Park. 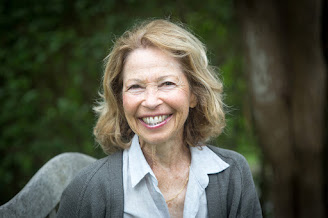